Imagine you’re a veteran of World War II. After Pearl Harbor, you were deployed to Northern Africa and then Italy to fight the Nazis before becoming part of the force that landed in Normandy on D-Day. You lost many friends during the war and when you returned to the United States, you vowed to never take our freedoms and democracy for granted. That means a lot of things to you, but importantly, it means that you never forget to vote. It doesn’t matter if the election is for local school board, state Senate, or the president of the United States. You’ll be there doing your duty.

Over the years, however, you have grown increasingly frustrated that younger generations do not show up at the polls. And this apathy is reflected in other parts of society, from service in the military to a lack of respect for the important institutions of government. That’s your perception, at least.

One day, you talk to your grandson about the upcoming presidential election. You called to wish him a happy birthday and the conversation quickly transitioned to politics. He tells you about the political campaign he volunteered with in the primaries, although his candidate lost. He also tells you about the protests that he has participated in recently, in opposition to the President’s immigration policies. You feel proud that your grandson has been so politically engaged. Like you, he doesn’t take our democracy for granted. However, when you ask him whom he is voting for in the general elections, he responds that he isn’t voting. In his words, “Both politicians are equally corrupt. And the system is broken anyway. What difference could I make?” You cannot believe what you’re hearing. You simply cannot reconcile his civic activism with his refusal to vote. And why won’t he even vote for local office?

Unfortunately, in today’s America, it is not difficult at all to imagine the above conversation happening between a grandfather and his grandson. Indeed, rates of voting have been depressingly low in the United States for decades and voter apathy is high. Technologies that we thought would help drive civic engagement such as the internet have failed to do so, and only one-fifth of Americans studied by Pew Research Center have engaged in more than four political acts in a year. What’s more, many young people who are politically engaged on college campuses and protest movements, nonetheless, do not show up at the polls. What we’ve tried so far isn’t working, and the technologies we’ve innovated haven’t saved us, so where do we go from here?

Fortunately, many of the tools we need to combat voter apathy are in our grasp. But rather than use one of our new apps from Silicon Valley, all we need to do is talk to our grandparents. Or at least, that’s a good place to start. 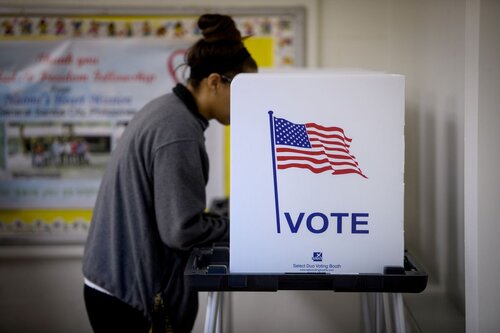 Indeed, if the grandson in our quite realistic hypothetical had asked his grandfather why he should vote, he would have gotten an earful about his grandpa’s service in World War II. But it probably would have gone beyond that. The grandfather would have talked about civic duty; how we owe it to those who came before us to exercise our rights as citizens. He might have asked his grandson to think about our founding fathers that fought and died for our independence; to think about the generations of those in bondage and slavery who never had the opportunity to participate in our democracy; and to think about Civil Rights leaders like Martin Luther King Jr. or John Lewis who were willing to give their lives for the franchise. He might have asked his grandson how he can justify not voting when others have sacrificed so much for the opportunity, giving their lives to secure the democracy that we live in today.

And last, the grandfather would have reminded his grandson that many of the causes that he cares about and most likely has protested for, are substantially state and local issues. Indeed, by virtue of federalism, whether it’s education, public transportation, or the criminal justice system, to name just a few areas of policy, chances are, the issues the grandson cares about can be impacted significantly at the state and local level. And by refusing to vote in state and local elections, the grandson is giving up his power as a citizen to make a real difference.

The apathy that has overtaken much of the country reflects a misunderstanding of the impact that we all can have if we exercise our power as citizens. It also underscores the fact that, unfortunately, Americans have taken their democracy for granted. We may understand what our rights are as citizens, but how many truly appreciate that we also have duties? What we need is to engage in a nationwide conversation about the meaning of citizenship, helping to re-instill in all of us a sense of civic knowledge and virtue that is at the core of civic engagement. This might seem like a daunting task. But all it takes is an open mind and one call to our grandparents to set us on a path to active citizenship.