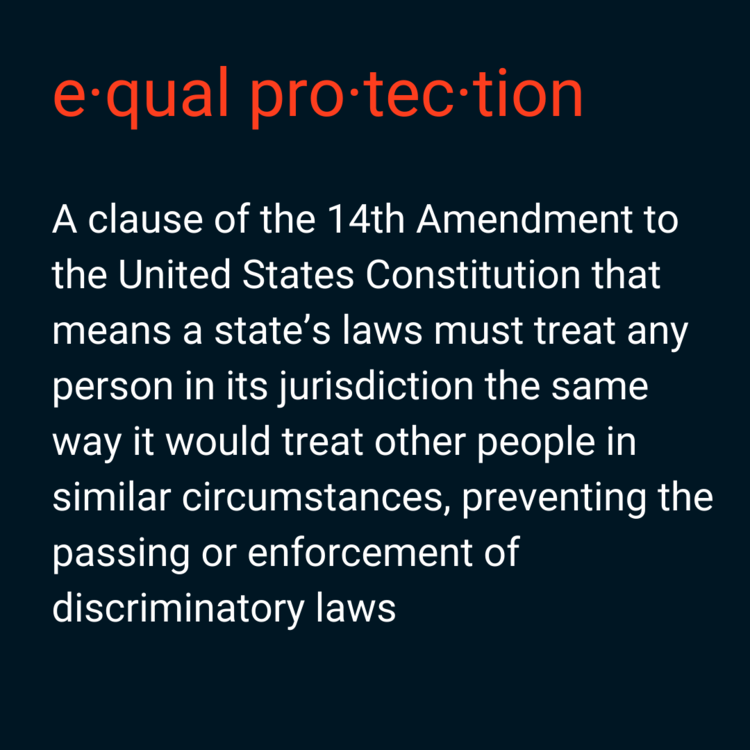 “This guarantee… is that all citizens shall be forever equal, subject to like penalties for like crimes … It is to secure to the citizens of each State all the privileges and immunities of citizens of the United States.” John Bingham’s words, written upon the passage of the Fourteenth Amendment of the US Constitution in 1868, marked a cornerstone of the American experiment – that all citizens should have the right to equal protection under the law. Almost a hundred years of Jim Crow laws followed, however, in which the Amendment did little to legally protect African Americans. However, starting in 1954 with the monumental decision of Brown v Board of Education ending segregation in public schools, the Clause has served as a shield against state-sanctioned bigotry in all forms. Indeed, it is hard to picture today’s world without the rights the Equal Protection Clause gives to Americans of all races, religions, creeds, genders, and sexual orientations.

But while our society has advanced greatly in protecting the rights of the historically oppressed in recent decades, the roots of discrimination can always take hold when groups in society stand to benefit from disadvantaging others. Imagine the state of California in 2030. Ground-breaking technological innovations in Silicon Valley, from human-like artificial intelligence to space-based solar power, have meant that the state has cemented and accelerated its global role as a leader in the tech field. And continuing a decades-long trend, young entrepreneurs across the world flock to the West Coast to try and make a fortune.

As a result, the percentage of young people in California has skyrocketed. CEOs in the tech industry are only getting younger. An industry that has always favored young blood is seeing its ranks filled by ambitious 20-somethings. Even wunderkind highschoolers are making the trip out to California for prestigious and highly paid coding jobs.

For years, tech companies in California have noticed a sharp rise in productivity as their workforce grows younger. And so many of the firms start to commission population-wide studies into productivity based on age in the hopes of maximizing effectiveness and efficiency. They find that there is a correlation between youth and a variety of positive variables, including creativity, drive, and the willingness to work long hours. Most startlingly, these studies demonstrate that employees with peak efficiency are usually in their 20s or early 30s.

Many firms therefore start accelerating the employment of young adults, expanding recruitment schemes for teenagers and highly skilled workers from abroad. Some firms take this even further, and privately discourage the hiring of anyone older than 50.

As tech firms continue maximizing their productivity, competition develops to seek out the youngest and most efficient workers – after a few years the average age to hire a new employee is 23. Many experts criticize these policies, arguing tech companies’ research into youth productivity is flawed and uses measures that are biased against older people, but the practices continue. And why not? Productivity is at record levels. In fact, California tech companies’ youth-heavy approach becomes so popular that other organizations and companies in the state begin to copy the method, with the state government in particular putting a strong emphasis on hiring younger candidates. What’s more, the California government seeks to permanently realize this state of affairs across society, and passes a law giving tax breaks to any company that promotes these age-restrictive practices.

Over time, these attitudes create a significant rift with the state’s “older” population, who argue they are being unfairly discriminated against. But it doesn’t stop there. After a voting pattern emerges where the state’s younger voters select young, progressive candidates that vow to continue the youth-led employment movement, California’s newly elected governor signs a bill into law where all those under the age of 35 will be given preference in the housing market. And, in order to reduce the state’s deficit, state pensions will be greatly reduced. With the government making clear that young people are the priority, much of the older population of the state emigrates en masse to other parts of the country. This world might seem distant from today’s reality, and indeed parts of it would not be legal. The Age Discrimination in Employment Act (ADEA) prevents age discrimination in the workforce against people over the age of 40.

However, much of the discrmination by tech companies in our story affects those under the age of 40. And while the state’s discriminatory policies toward older Californians might seem downright dystopian, many of them arguably don’t run afoul of the 14th Amendment. In 2009, the Supreme Court raised the burden of proof for age discrimination so that a worker can only prove discrimination if an action taken against them was done solely because of their age. And in 2018, two federal appeals courts ruled that the Equal Protection Clause does not extend to age discrimination if a law is “rationally related to a legitimate government interest.” In our story, California’s politicians could have justified their favoritism by arguing that their pro-youth laws are necessary to attract young adults to live in the state and maintain industry productivity – legally speaking, this may satisfy the rational basis test. And the problem of age discrimination isn’t simply hypothetical. In a 2018 survey of more than 500 founders of tech startups, 89% of respondents believed that older employees suffered from age discrimination from as young as 36. Numerous tech companies have faced age discrimination lawsuits; in 2019, Google agreed to pay $11 million to settle one filed by over 200 job applicants.

Prejudice against older workers is a problem outside of tech, too. A recent survey found that almost one in four workers over the age of 45 had faced negative comments regarding their age by co-workers, and a 2018 analysis found that 56% of US workers over the age of 50 were removed from full-time positions before they wished to retire (the most notorious of these cases came with tech giants IBM Corp., where a damning report found that the company regularly replaces elderly workers with younger ones to “correct seniority mix”). When one thinks of the Equal Protection Clause, it’s easy to focus on the most reported issues the Clause covers. In recent decades, there has been particular attention paid to issues of race, gender and sexual orientation, and rightly so – many individuals in these groups have long faced oppression in the United States, and deserve the fundamental right to equal treatment before the law. Yet the Clause was made to allow any person in a state’s jurisdiction “the equal protection of the laws.” And that’s where the Amendment’s true power comes from.

Currently however, the law does not do enough to protect older Americans. Indeed, the rational basis test, as presently interpreted by the Supreme Court, allows states to create laws that disproportionately damage the elderly, provided there is a “legitimate” government interest at stake. But the point of the Equal Protection clause is to ensure states cannot discriminate against their citizens, no matter who they are. It is the Judiciary’s role to scrutinize states’ actions in order to protect older Americans from this sort of discrimination. We all get old; and it’s up to all of us to ensure that the law protects us as much when we hit 73 as it did when we were 23.