Defining Democracy: Freedom of the Press 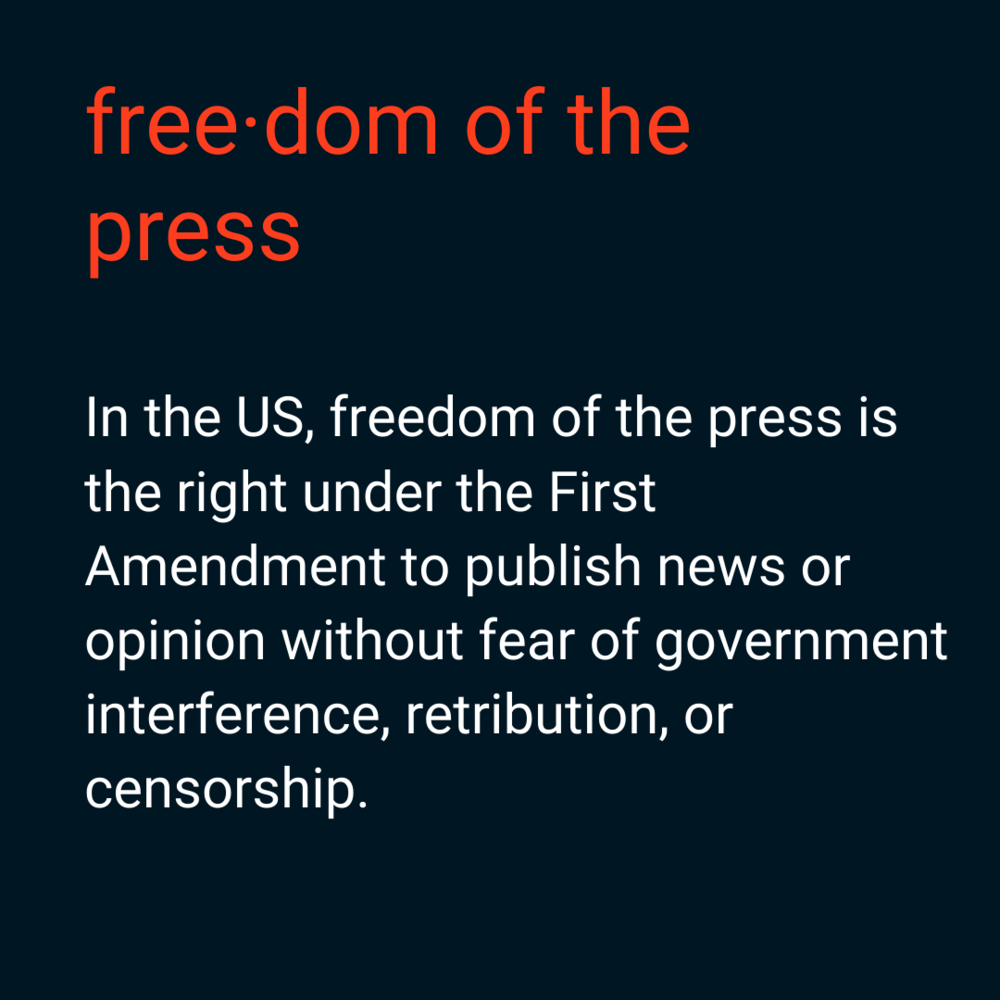 In the US, freedom of the press is the right under the First Amendment to publish news or opinion without fear of government interference, retribution, or censorship. This freedom is at the core of democratic life and allows citizens to stay informed about matters of public importance, to freely criticize and judge public officials, and to expose government corruption and incompetence.

Imagine a world without the free press, a world in which censorship prevents newspapers from holding those in power accountable for their actions. One in which the public doesn’t have access to the information necessary to make informed decisions as citizens.
This has actually been the case throughout most of history. Even today, much of the world lives without the press freedoms we enjoy in our constitutional democracy. Fortunately, this is not our world. But imagine for a moment that it was.

Imagine you live in a small town in Illinois. You are a parent of three and a history teacher at the public high school. One day, while walking home along the banks of the local river, you see trucks from one of the major state energy companies dumping what appears to be a yellow chemical substance into the river below.

You know you need to do something. Your family, neighbors, and students live in this town and drink the water. So the next day, you go to the local paper and speak with the editor. You tell him what you saw, but surprisingly, he responds that the paper has already learned about the dumping of chemicals but cannot publish. “Why not?” you ask. The editor explains that the town mayor got wind of the story and threatened to shut down the paper in response. Apparently, the mayor receives major campaign donations from the CEO of the energy company polluting the river.

You are alarmed and worried that these chemical spills will continue. When you return home that night, you call a college friend of yours who is an editor at the Chicago Tribune and explain the story. She informs you the Tribune simply cannot pursue this matter. Several years ago, they had been sued for defamation after publishing a story about corruption between the Governor of Illinois and a very wealthy corporation. The Tribune almost went bankrupt, and it cannot afford to take on another story involving powerful figures.

At this point, you are feeling increasingly outraged. So you consider speaking out yourself on your Facebook page or personal blog about the chemical spill and the mayor’s role in covering it up. However, you remember that a little over a year ago, a friend of yours spoke out about corruption in the local mayor’s office. In retaliation, the mayor had the sheriff harass him and his family, even threatening him with arrest. And the mayor fined the man’s business, causing him to go bankrupt. As much as you want to expose the truth, you fear what the mayor may do to punish you. So you keep quiet. And you and your family drink bottled water from now on.

Now, fortunately, this is not our world. For one thing, the town’s local paper WOULD have been able to publish the story and expose the chemical company in real life. The mayor threatening to shut down the newspaper is an egregious form of press censorship and absolutely prohibited by the First Amendment. In the real world, the Chicago Tribune WOULD have been able to publish the story without fear of being sued. In New York Times Co. v. Sullivan (1964), the US Supreme Court ruled that newspapers have robust protection against defamation suits so that journalists can freely report on matters of public importance. And lastly, the person in the story WOULD have been able to speak out on his blog or Facebook page. In America, under the First Amendment, it is unconstitutional for the government to retaliate against journalists or ordinary citizens for what they say.

The dystopian world outlined in the above example is hard to imagine. But that’s because we have had freedom of the press for so long that we have taken it for granted. We cannot continue to do so. The kinds of verbal attacks declaring the press “Fake News” or worse are very dangerous. To be sure, in today’s politicized climate, some journalists appear biased, but most continue to seek truth wherever it may lead. Attacking the press as a whole weakens the public’s faith in journalism, which could ultimately help a future leader take away our important press freedoms. Outside of free and fair elections and separation of powers, a free press is society’s main shield against authoritarianism. We must be vigilant. We must recognize when it’s being attacked. And we must fight to protect it.