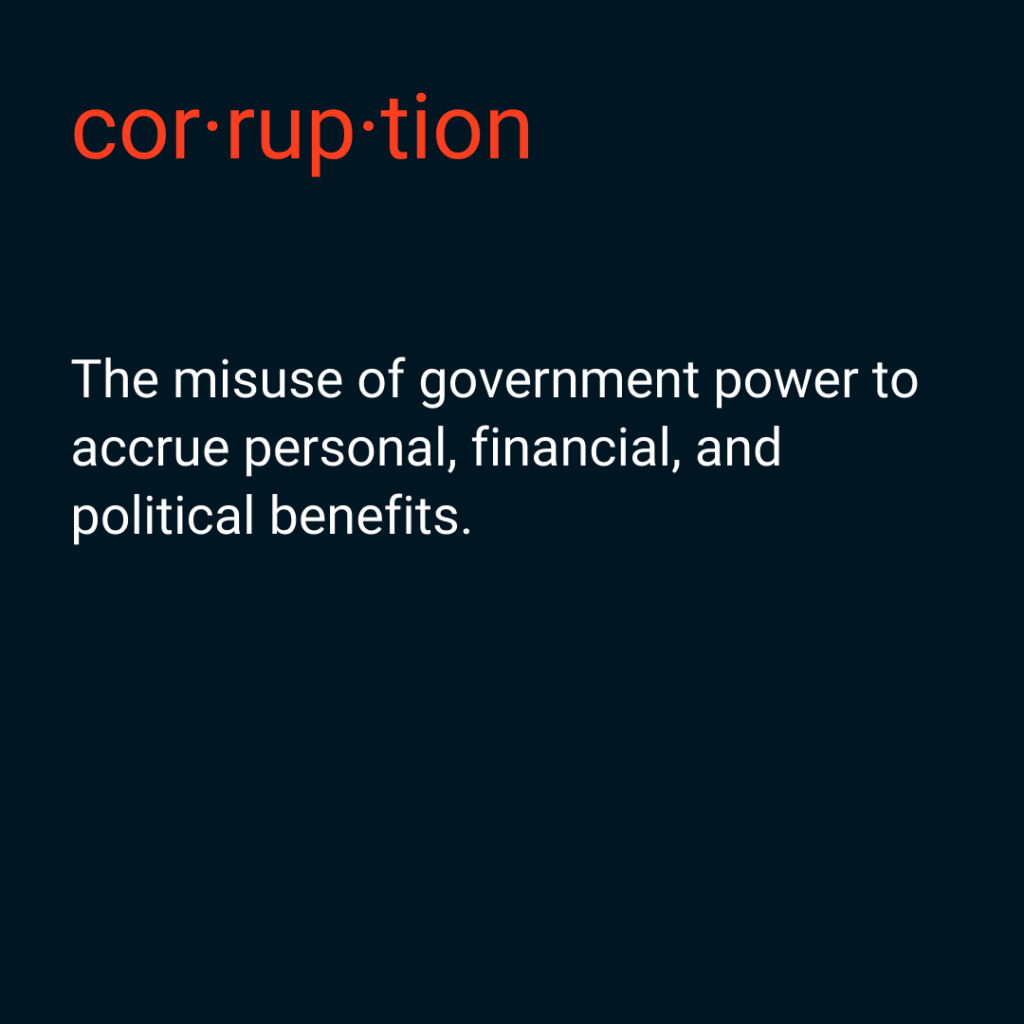 It’s your first day of work and you slept through all your alarms. You are usually a safe driver, but you decided this time that you would disregard the speed limits to avoid making a bad impression on your first day. Next thing you know, a police vehicle has signaled for you to pull over. In countries with low levels of police corruption, you would receive a ticket or fine, and if you disagreed with the ticket, you could challenge it in court. However, in a country with corrupt police, the officer might solicit a bribe from you in exchange for letting you go on your way undisturbed. This might also mean that you could be pulled over for a bribe without breaking any law in the first place. This behavior is just one of the numerous ways that corruption plagues society today, ranging from law enforcement and local governments all the way up to heads of state.

Corruption, at its most basic, can be defined as the abuse of power for personal gain. It can consist of simple, petty acts like a minor official soliciting a bribe or a mayor funneling city contracts to their friends, or, it can be as grand as the corruption of a head of state who uses the treasury as their personal piggy bank. In all of these cases, government officials and their associates benefit from the wrongful allocation of public funds or allow private entities to influence their political duties.

When a nation is mired in corruption, less money goes to needed institutions and social services, and international investors are more wary of putting their money into the country, which slows growth. For this reason, corruption is an especially grave issue in developing countries, where social services may be especially weak and institutions are often not as robust as they need to be in order to ensure accountability.

When left unchecked, it is the poorest and most vulnerable in society who suffer the most. The World Bank found that “In Paraguay, the poor pay 12.6 percent of their income to bribes while high-income households pay 6.4 percent. The comparable numbers in Sierra Leone are 13 percent and 3.8 percent respectively.” This prevents financial mobility and worsens the cycle of poverty. Corruption destabilizes a society systemically and insidiously, compromising the trust of the general public in their governing bodies. Over time, it redistributes power to the wealthy and connected, effectively making ostensibly democratic countries that much less democratic. In other cases, this trust vacuum allows demagogues to exploit the anger of the general public and channel it for political power.

Corruption most easily flows from top to bottom, as top officials permit and encourage the entrenchment of corrupt schemes throughout governments in order to leach from their respective societies. Additionally, mid-level authorities who engage in corruption are often blackmailed by their superiors, who can hold their crimes over their heads in exchange for political/financial favors. The message is clear: fall in line with those above you and get financial privileges in the process, or suffer. The higher up the corruption reaches, the greater financial rewards may be for those involved at all levels. This culture of corruption from top to bottom stifles progress, making it next to impossible for any political changes to occur.

A potent example of this entrenchment of corruption is in the Russian Federation, where Vladimir Putin’s rise to power and prolonged tenure as President and Prime Minister have been riddled with corruption scandals from money laundering, to exploiting natural resources, to enriching friends and family members, to the assassinations of dissidents who expose corrupt intelligence officials. The political disarray following the fall of the USSR allowed Putin to mold the government in his image – one that involves next to no checks on his power, and a system of political patronage where money and favors are exchanged for loyalty. Nearly everyone in Putin’s inner circles has accumulated huge wealth during his time in power. Meanwhile, much of Russia’s population suffers from economic stagnation and an increasing cost of living without additional social services or opportunity. By raiding public funds and inflating budgets (See the $50B+ budget for the Sochi Olympics), Putin is able to channel significant amounts of money from the government into his own pockets or the pockets of his friends and allies.

This corruption effectively “trickles down” to the regions and individual cities. In the case of Tatarstan, a republic within the Russian Federation that claims a level of independence from Moscow, the government has a mutually beneficial relationship with Putin, founded in corruption. According to FBK, Alexei Navalny’s corruption foundation, President Minnikhanov of Tatarstan has managed to enrich all of his family members through a bribery scheme involving many businessmen with ties to Putin. In exchange, Minnikhanov ensures that Putin’s United Russia party receives a disproportionate number of votes from Tatarstan, exceeding the vast majority of other Russian regions. According to FBK, the corruption that occurs in this semi-autonomous province goes far beyond what could even be imagined in Moscow. The Minnikhanov family maintains residences in France, Dubai, Moscow, and several across Tatarstan, including one which features a helipad gifted by Tatneft (the regional petroleum company). Despite the exposure of these scandals, nothing has changed so far.

Once the corrupt systems in a given country are in place, it is extremely difficult to displace them as their leaders are now motivated not only by greed or thirst for power, but also by a fear of jail should they lose. Dissidents are often the first victims of this process. Boris Nemtsov, a well-known Russian politician and activist, condemned the widespread embezzlement of Sochi Olympics funds by Putin’s inner circle, as well as Russian involvement in Ukraine, only to be assassinated in front of the Kremlin.  Russian investigations didn’t turn up a whole lot, which should not be too surprising as the officials investigating Mr. Nemtsov’s death were themselves corrupt.

Free press, fair elections, and independent watchdogs are all essential elements of resisting corruption. The worst nightmare of a corrupt official is answering to an empowered civil society that has unbiased political institutions to reliably safeguard accountability. Corruption isn’t always obvious, but we should remain alert and recognize when something ceases to be merely “improper” and becomes something much more dangerous.