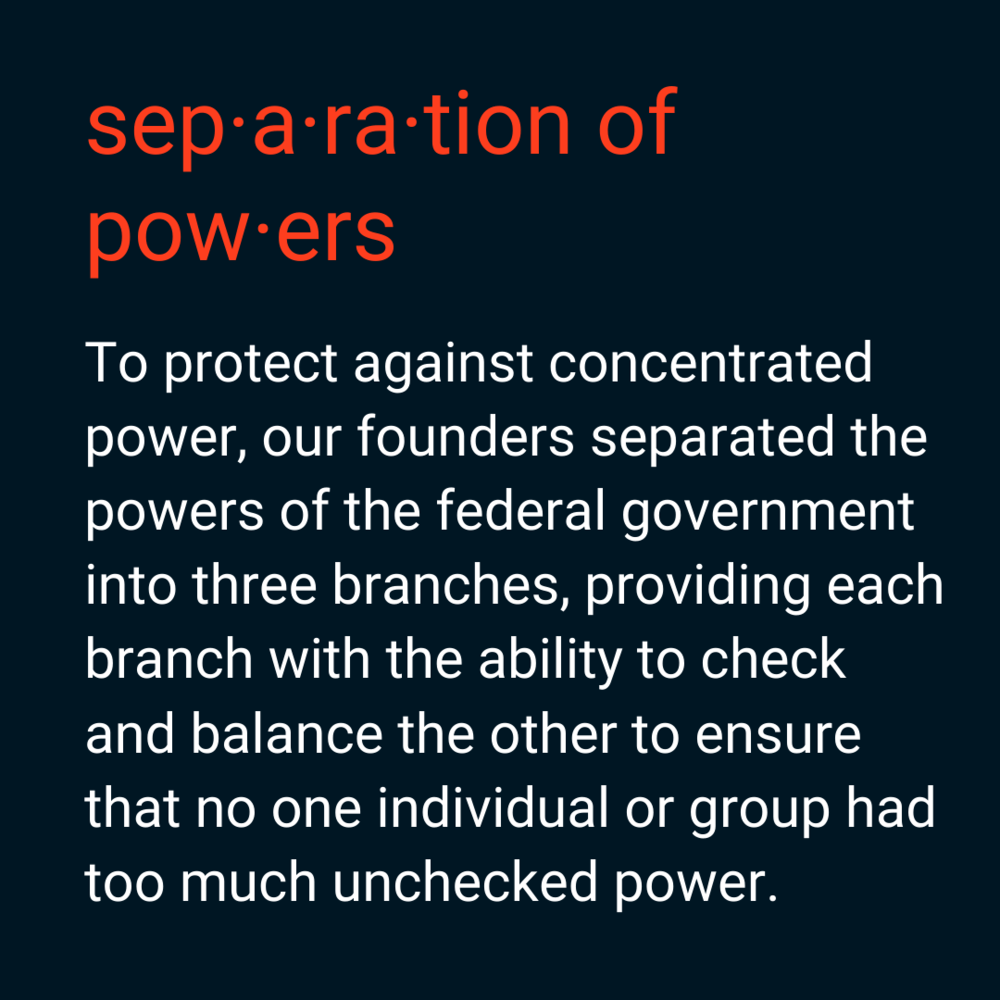 Very few sayings are as true and timeless as the idea that power corrupts and absolute power corrupts absolutely. Our founders, who suffered under the tyranny of King George III, understood this danger. So when they won their Independence from Great Britain, they designed a system of government to prevent any single body or individual from possessing too much power. This system separated the powers of the federal government into three branches, providing each branch with the ability to check and balance the other to ensure these powers stay divided.

For example, under the Constitution, Congress has the power of the purse while the President executes the laws of the land and is the Commander-in-Chief. What’s more, the President can veto legislation passed by Congress, Congress can impeach and remove the President from office, and the judiciary can declare the actions of the other branches to be unconstitutional or otherwise inconsistent with existing law. Now, this may seem like a really inefficient way of structuring a government where each branch can overrule the other, effectively slowing down the decision-making process. There’s truth to this. But no one said that democracy was supposed to be efficient. Indeed, imagine, for a moment, a world without Separation of Powers. In such a world, Washington, D.C. would probably be more efficient, but the President could get away with almost anything.

Imagine that you live in such a world. One day you see the President give a speech on TV, in which he announces a new tax proposal that will seriously harm your small business. You are obviously very upset, and you voice your frustration on Facebook. You write passionately about how you own a hardware store that has been passed down in your family for three generations. But while the business is a staple of your community, margins are tighter than ever, and this new tax could put you out of business. You finish the post by saying the President’s policies are destroying small businesses throughout America.

The post goes viral. In fact, it helps stir a public outcry to the new tax and threatens the President’s political fortunes. But although you feel proud that you spoke truth to power, you soon realize the hornet’s nest you have disturbed.

On the way to your doctor’s office one day, you notice that you’re being followed by someone in a black suit. The next day, the President’s media surrogates tweet out attacks against you, which include embarrassing details that only your doctor could know. The week after that, a private phone conversation between you and your wife somehow goes public, spreading like wildfire on the internet. It has been doctored to make you seem abusive. And for good measure, you also receive a letter in the mail that your taxes are being audited by the IRS.

You don’t know what to do. You’re scared and fear for your safety as well as your children’s. You talk to a family friend who used to be an attorney in the Justice Department to ask for advice. He says that it would be best to drop it. It’s just not worth the effort, cost, and risk. Even still, this is America and you cannot believe there’s nothing you can do to defend yourself. You quietly reach out to your local Congresswoman, whom you have known for years, to tell her what happened. She is alarmed at the President’s behavior, but explains that over the years, Congress’ investigatory powers have been reduced significantly as the executive branch has grown more powerful. And though impeachment is still technically part of the Constitution, in practice, nobody takes it seriously. Furthermore, far from being the final arbiter of what the Constitution means, the Congresswoman explains the federal courts have simply become a rubber stamp on the President’s orders.

You realize that you are all alone against the most powerful person in the world. You think twice about ever speaking out again.

Thankfully, this scenario isn’t our reality. Despite all the strains on our democracy, in the above example, you WOULD have had recourse for the President’s wrongdoing. Indeed, the President hadn’t just violated your constitutional rights when he personally ordered the FBI to break into your doctor’s office, the NSA to tap your phone, and the IRS to target you. When the President weaponized the different agencies of the executive branch for his personal, political gain, he seriously abused his power under the Constitution. Congress, even in our extremely politicized era, WOULD have investigated. This would most likely have included subpoenas of witnesses and tape recordings of the President’s alleged crimes, which, if challenged, WOULD have been upheld by the Supreme Court. And after the evidence was reviewed, Congress WOULD have had the option to impeach and remove the President from power.

On the other hand, you might think the scenario mapped out above isn’t so unimaginable. Indeed, now more than ever, we rely on the system of Separation of Powers to keep our precious and fragile democracy intact. In today’s world, we need representatives, judges, and Presidents committed to our constitutional framework to ensure stability and to defend our Republic against would-be kings.