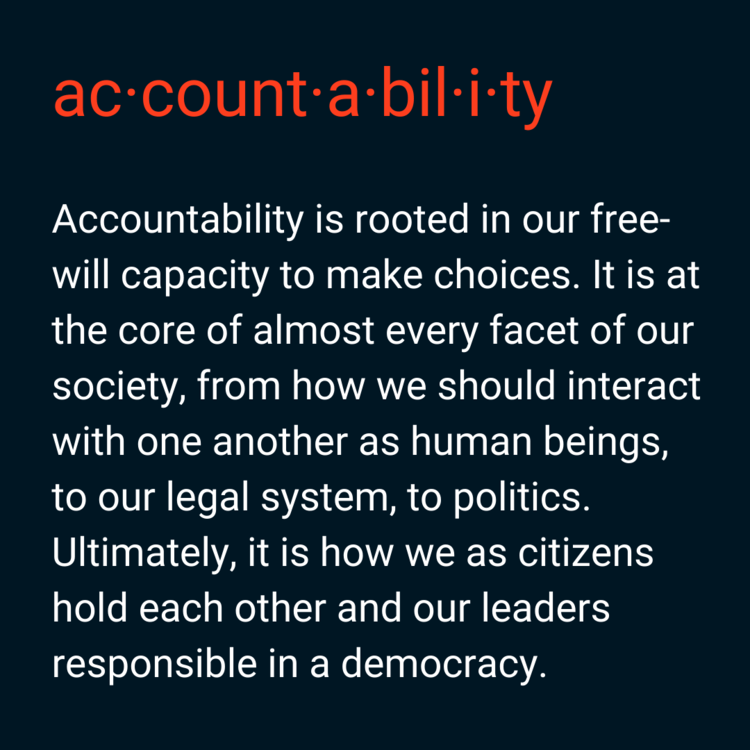 Let’s imagine that you are waiting in a long line to renew your driver’s license, where the basic rule is “first come, first served.” If a latecomer cuts the line ahead of you, you—and everyone else in the hot and sweaty government building—will quite rightly ask them “why did you do that? By what right can you jump the line?” At least, that’s the polite version of the situation. If the line cutter turns around and explains “I’ve got a sick child in the car and I don’t want to keep them waiting,” then you will probably let them stay. A sick child is usually a good reason for bending the rules. However, if the line cutter turns and says “I just don’t feel like waiting” then you will probably ask the officials to remove him. Feeling apathetic is never a good reason for bending the rules.

What is described above is the heart of what we call “accountability.” When the line cutter performs an action that is open to being questioned, they have to justify themselves. They are being held accountable for their actions. If their reasons are sound, we accept them. If their reasons are insufficient, we reject them—and make them leave the line. Right or wrong, the line cutter has to accept responsibility for their actions. That’s accountability.

The root of the word accountable—“account”—also forms the root of the word “accountant.” In a word, accountants measure numerical financial information. It doesn’t sound particularly exciting. As far as we know, there are no popular television shows about accountants doing accounting. In fact, people probably don’t even submit scripts or screenplays for television shows about accountants. It’s just…boring. So does that make accountability boring, too? Well, no.

The top shows on television are about lawyers and judges in courtrooms and cops on the beat. Cops chase down bad guys to bring them to justice and the courts help ensure that justice is served. And the principle of accountability under the law isn’t just entertaining for TV purposes. It’s at the core of our legal system. Indeed, in America, we are all supposed to be accountable to the law. That means both that nobody is above the law, and that we are all equal under it. Leaders uphold the rule of law by recognizing that they not only make and enforce the laws that govern the lives of others but are governed by those laws themselves. This recognition lies at the heart of well-functioning democratic systems.

And accountability extends far beyond just the law. Political accountability is a vital part of our democracy. The United States is a representative democracy, meaning that citizens vote in scheduled elections to give power to elected officials to represent them and act in their interest. Elected officials will, during their term of office, make choices on behalf of the people who elected them. After a defined number of years—usually 2, 4, or 6 years—citizens are given an opportunity to hold the elected official accountable: they are given the choice to vote for the person to stay in office, or vote them out of office and have a new person take the position.

Oftentimes, despite their best efforts, elected officials cannot do what they promised to do. Budget constraints, entrenched interests, and legislative disagreements are all major obstacles. At an election, we have the option to forgive their failures or to find someone who we think won’t fail. And at other times, elected officials will take actions that are either criminal or go against our constitutional values. If that happens, we have a responsibility to hold them accountable and vote them out, because they are no longer fit to represent us under our constitutional system of government. To be sure, in today’s hyper-polarized world, it is sometimes hard to tell when a politician is truly unfit to lead, as opposed to simply being labeled as such by partisan attacks. But differentiating one from the other is our job as citizens. After all, if we don’t hold those in power accountable to the law and to the Constitution, then who will?

Democracy is almost certainly not the most efficient form of government. The system of accountability we’ve put in place, which includes separation of powers, necessarily slows the wheels of government –sometimes to a complete standstill– to ensure that those in power are acting in the people’s best interest. Arguably, a brilliant, benevolent dictator might be a more effective leader in the short-term, better able to respond to the people’s needs, because he doesn’t have to constantly worry about re-election. But one of democracy’s key advantages over other forms of government is that it is the only system that can guarantee reliable long-term results. That is because of the presence of accountability. Indeed, democracies are self-correcting. If a leader steps too far out of line, we are able to kick them out rather than be stuck with a king drunk on power.

Accountability is deeply rooted in our free-will capacity to make choices. It is at the core of almost every facet of our society, from how we should interact with one another as human beings, to our legal system, and to politics. Ultimately, it is how we as citizens hold each other and our leaders responsible in a democracy. Indeed, accountability is something that we treasure as Americans. It might not be the fanciest of principles, but it allows us the freedom to live in a society where we make the rules and hold each other responsible for abiding by them.