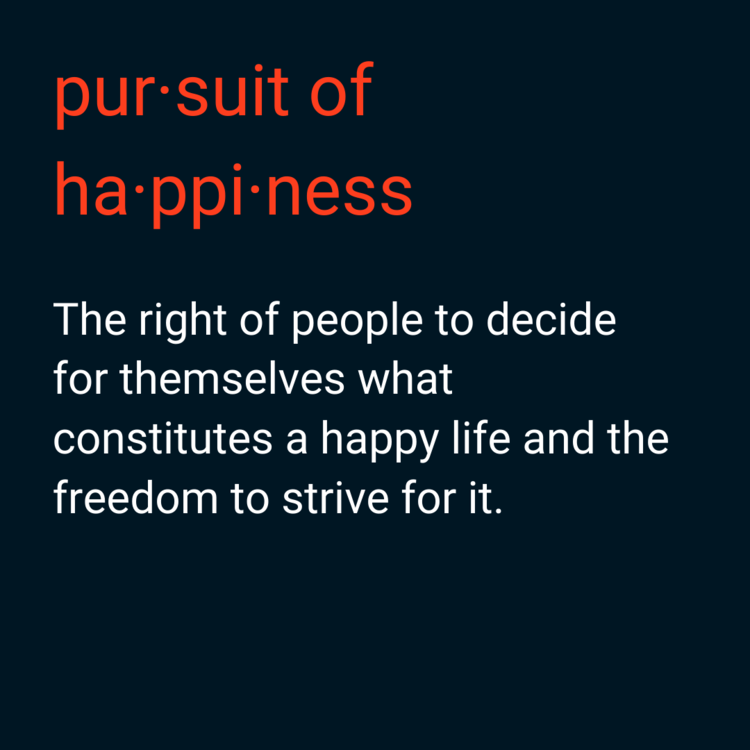 In the Declaration of Independence, Thomas Jefferson enshrined the “pursuit of happiness” as a basic right, writing: “We hold these truths to be self-evident: that all men are created equal; that they are endowed by their Creator with certain unalienable rights; that among these are life, liberty, and the pursuit of happiness.”

But why did Jefferson include the qualifier, “pursuit of”? Couldn’t he have just left those words out, indicating a right to happiness in and of itself—as do certain constitutions around the world, such as the one in Turkey (See Article 5)? Jefferson’s deliberate word choice reveals that the Declaration of Independence wasn’t just a declaration of grievances or even of our rights. It was an aspirational document charting a new course for a new country, reflecting the entrepreneurial, inventive, and explorer ethos of our people. And above all else, it was about people deciding for themselves what constitutes a happy life and having the freedom to strive for it. This freedom has been at the core of American life ever since.

It is hard to imagine an America without our right to pursue happiness in our own way, as it is such a profound reflection of our people and nation. But let’s try. Imagine a world where Jefferson hadn’t written those two little words — “pursuit of” — in our Declaration, a world in which happiness itself was guaranteed.

The year is 2030. Income inequality has continued to be a serious problem. Student debt has continued to balloon. And too many Americans don’t have adequate health insurance. In response, a new group of political leaders looks for a unique way to tackle these problems. And after months of deliberation and hearings, Congress imposes a significant income tax, whereby anyone making over 100K annually in income is taxed at 75 percent.

Congressional hearings on the bill are centered around the new and burgeoning field of “well-being” studies. Academic experts who claim to have investigated the ideal amount of happiness in one’s life testify that they’ve determined that anything significantly beyond basic needs (housing, healthcare, education) counts as “excess happiness.” These experts have offered estimates for how much people should be expected to spend on vacations, houses, dining out, and other such “disposable pleasures.”

As an ordinary American and relatively recent college graduate (you graduated 5 years ago), you make far less than six figures, so initially you are OK with the plan. After all, it will help equalize the playing field and might even raise your quality of life. You are hopeful that Congress will use the wealth tax to excuse all student debt, which would take a significant weight off your shoulders.

But let’s take a closer look at your story.

After college, you go into management at a retail company. You become a mid-level manager. It’s a decent job, though there aren’t many prospects for career development. Things generally seem okay, especially in light of the new wealth tax bill. But you soon come face to face with the downside of Congress’ redistribution plan.

For several years, as a side project and in pursuit of your true passion, you have been developing an app with several friends from college. The program would decentralize publishing and allow people to sell their books directly to their readers online. And recently, you’ve had a breakthrough in developing the app. Excited, you approach a friend who works at Silicon Valley to feel out the marketplace. But your friend says that, unfortunately, the wealth tax has seriously affected the health of the major tech giants, as well as the smaller startup scene. Angel and institutional investors simply do not want to invest as much. And the banks are far less willing to give out loans. What’s more, your friend tells you that not only have funds dried up, but there has been a serious decline in interest in the tech industry altogether—applications from college students and recent grads to tech firms have decreased greatly across the country. There is no way for you to get your dream, an entrepreneurial venture that could have helped countless consumers across the country, off the ground. Like any startup, this project was a risk even before Congress passed its bill defining what “happiness” looked like, but now it’s an impossibility.

Of course, we must ensure greater access to opportunity for a greater diversity of people. There’s no doubt that some people are born with significant advantages that are denied to others. But we can hold two beliefs simultaneously: 1) That we need an expanded social safety net that offers more people the opportunity to pursue what makes them happy and 2) That the government should be careful not to go so far as to make the cure worse than the disease by limiting people’s ability to make their own choices about what to do with their lives.

Recent trends in American politics, however, appear to show a break with the Jeffersonian vision of pursuing happiness. For one thing, young people are increasingly supportive of authoritarian forms of government and there are worrying trends on both the far left and the far right. According to a YouGov poll, more than a third of millennials in the US approve of communism. And on the right, there is growing support for Russia’s authoritarian leader, Vladimir Putin.

The authoritarian impulse illustrated in our story seeks to enforce a particular version of happiness on a diverse array of people. It doesn’t account for the fact that happiness means different things to different people. Governments are not in a position to guarantee it because they are not in a position to know what it is for most of us. What makes this even more complex is that the pursuit of happiness is a significant component of happiness itself. In other words, we derive meaning (and therefore fulfillment) from having invested effort in a worthwhile endeavor. If we were to have simply been granted success, we would have been much less likely to achieve sustained satisfaction. For instance, there is a significant difference in well-being between people who made their money on their own and people who were given their wealth by their parents. When a government seeks to impose its version of happiness by force of edict, it removes one of the most important contributors to happiness: our own agency in striving to achieve it.

We want to live in a country where each person is the hero of their own story. Where they have the opportunity to go out west and develop an app; or perhaps to go to law school to become a lawyer; to medical school to become a surgeon; to trade school to become an electrician; or to save enough money to start a business. And even upon occasion, to fail. The price of having the right to “pursue” happiness is the risk that one might fail. But failure is something to learn from — not fear. We must embrace this striving spirit. Not extinguish it.