Over the last few years, social movements have played a critical role in the political landscapes of countries around the world. From anti-authoritarian protests in China and Russia to racial justice movements in the US, advocacy groups and protestors have brought public attention to important social issues. And with the recent Black Lives Matter protests prompting legislators to tackle police reform – a direct result of protestor advocacy – now is a perfect time to discuss the role that social movements have in facilitating policy change and upholding rights and freedoms in democracies around the world. Join the Renew Democracy Initiative (RDI) for our first livestream fundraiser with RDI Chairman, prominent human rights activist, and former World Chess Champion, Garry Kasparov and RDI Board Member and former Senator Heidi Heitkamp (D-ND) moderated by RDI’s Executive Director, Uriel Epshtein.

RDI’s mission is to build a community of people dedicated to liberal democratic principles. We empower individuals looking for an outlet to defend these principles on a national scale. 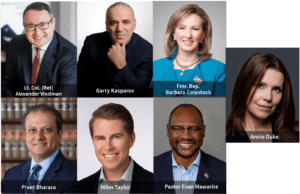 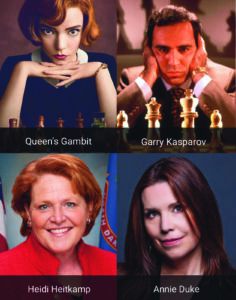 Lessons from the Queen’s Gambit: Chess, Decision-Making, and Politics